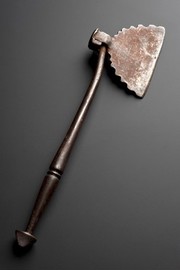 Choppers were used by apothecaries, who diagnosed illness and prepared remedies. Middle Eastern apothecaries were some of the earliest recognised pharmacists. Islamic medicine formed the basis for medical education and practice in Europe throughout the Middle Ages. Tools such as this were used in every medical tradition. Similar items were used in pharmacies in England up until the 1940s. The chopper has now largely been replaced by modern machinery to enable mass production. maker: Unknown maker Place made: Middle East