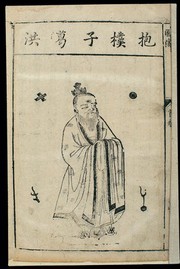 One of a series of woodcuts of illustrious physicians and legendary founders of Chinese medicine from an edition of Bencao mengquan (Introduction to the Pharmacopoeia), engraved in the Wanli reign period of the Ming dynasty (1573-1620) -- Volume preface, 'Lidai mingyi hua xingshi' (Portraits and names of famous doctors through history). The images are attributed to a Tang (618-907) creator, Gan Bozong. The account in 'Portraits and Names of Famous Doctors through History' states: Ge Hong, a native of Danyang, lived under the Eastern Jin dynasty (317-420). His style-name was Zhichuan, and he also called himself Bao Pu Zi (The one who embraces simplicity). He held the office of magistrate of Gaolou (present-day Beiliu in Guangxi province). He was expert at curing illnesses and well-versed in the classics. A Daoist adept, he knew how to make pills of immortality. He lived as a hermit in Luofu Mountain (a Daoist holy place), where he made pills of immortality and became an Immortal, after which he was known as Ge Xianweng (Ge the Immortal Sage). Ge Hong spent many years in retreat, wandering in the mountains, cultivating himself and writing. He is the author of Bao Pu Zi and Zhouhou jiuzu fang (Book of Remedies in Extremis to be Kept up one's Sleeve) in three volumes.