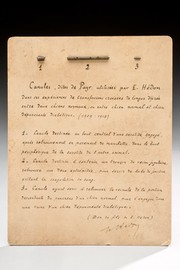 Cannulae are thin tubes inserted into the body. They create a route for fluid delivery or removal. The three examples shown were used by French clinical researcher Édouard Hedon (1863-1933) in experiments on blood transfusions between healthy and diabetic dogs. The accompanying letter, written in French, explains the process. Hedon was investigating the role of the pancreas in alleviating symptoms of diabetes. He found the symptoms of diabetes were alleviated when the blood of a normal dog was transfused in a diabetic who had undergone a pancreatectomy (the removal of the pancreas). Hedon also proved that a total pancreatectomy was necessary for the development of diabetes. Diabetes is caused by the inability of the pancreas to produce insulin, which releases sugars from foods in the body. Medical research using animals, particularly large mammals such as dogs, remains controversial. Hedon’s work occurred after the ‘Brown Dog Affair’. This was the un-veiling of a statue in London’s Battersea Park by anti-vivisectionists. The statue de-picted an anonymous brown dog that had died during medical experimentation. It prompted riots. Medical students removed the statue and threw it into the river Thames during one of these riots. maker: Payr Place made: France