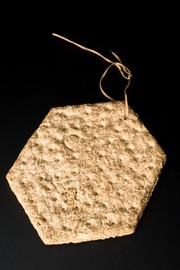 Ship’s Biscuit was sometimes known as ‘hard tack’ because of its jaw-breaking toughness. It was a staple diet of sailors for centuries. It was baked en masse before long voyages and stored until use. Ship’s Biscuit was made of flour, water and salt, but was often bulked out with other edible or inedible substances such as sawdust. It was one of the few foods that would not perish during a long sea voyage. However, many were bored into by weevils or nibbled by rats by the time the sailors ate them. Their limited nutritional value and lack of vitamin C meant the crew could develop scurvy if they relied on it. This biscuit belonged to the ship’s carpenter on an expedition to the Arctic in 1875. The expedition involved HMS Alert and HMS Discovery under the command of Captain George S. Nares. 138 officers and crew went on the expedition with several men identified as ‘Carpenter’s crew’ or ‘Carpenter’s mate’. The biscuit bears the government stamp of an inverted arrow. This was placed on all government belongings. It also has the initial ‘D’, which possibly stands for ‘Discovery’. Nares’ expedition was called off early after scurvy affected both ships. Nares was blamed because there was no lime juice to prevent the disease. Difficult weather conditions also made exploring the Arctic virtually impossible. maker: Unknown maker Place made: England, United Kingdom