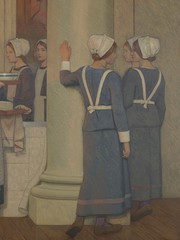 Oil Painting by Cayley Robinson. Orphan girls in the refectory of a hospital, proceeding to their place at the table. The painting shows the historic role of the hospital in bringing up and sustaining orphans and caring for needy people such as pilgrims, the poor and the sick. The Foundling Hospital established in London in 1739 is an example of a hospital that fulfilled that role. Much earlier, Domenico di Bartolo's frescoes in Siena had included a scene of the reception, bringing up, and marriage of girls entrusted to the hospital. In the present painting the uniformed girls continue the serpentine line which started in the previous painting and proceed to their place at the table, circumventing officialdom in the form of a draped column. The bust in the window and the ionic pilasters on the right remind them that they are the beneficiaries of institutional largesse. The deep sloping window embrasure with the view out to Fitzrovia where birds fly in freedom appears in several of Cayley Robinson's paintings, implying a prison-like interior in which children and young women are constrained by social conventions which they did not create

Unlike the other three paintings in this group, this one has no inscriptions, whether on the canvas recto or verso or on the stretcher.