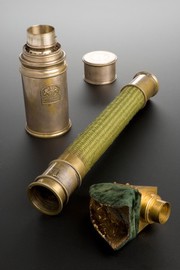 John Snow (1813-58) was the first specialist anaesthetist in Britain. He originally described his inhaler in 1847. The profile of both Snow and anaesthesia received a big boost when Queen Victoria was given chloroform during the birth of her son Leopold in 1853. The anaesthetist on that occasion was John Snow. In this inhaler, one canister was used for cold water and the other for chloroform. The brass face mask lined with velvet (shown here from a different example) was attached to the end of the flexible tube so the patient could inhale the anaesthetic vapours. The inhaler is shown here with a face mask (A625286). maker: Savigny and Company Place made: London, Greater London, England, United Kingdom