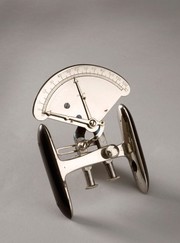 Force or power is measured by a dynamometer. This example measured the force of the hand. The metal gauge gives a relative reading of the force used when the two ebony handles are grasped and squeezed. The device may have been used in anthropometrical studies. In the 1800s, many anthropologists attempted to measure differences between human groups. Physical strength was mistakenly associated with a lack of intellectual development or ‘civilisation’. maker: Collin Place made: Paris, Ville de Paris, Île-de-France, France