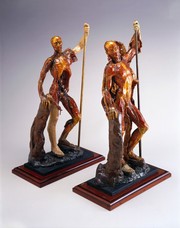 The wax and plaster model is a superficial dissection of a male body where the skin layer is removed to show the veins, arteries and muscles. This style of model is known as écorché. This figure is the original model for a large wooden statue at the University of Bologna, used to teach anatomy. It is believed the model was made by Anna Manzolini (1716-1774). Manzolini was made a lecturer of anatomy at the University of Bologna in 1755. From 1760 until her death in 1774 she was the professor of anatomy at the university with the added title of Modellatrice, which means “Model maker”. Her models were famous throughout Europe for their accurate anatomical detail. This model was bought with a similar figure (A600129) in Italy for 400 lira.