Copy of a statue showing a deformed cranium, Cairo, Egypt, 1 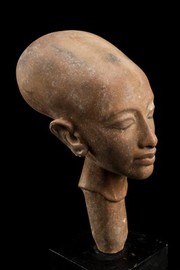 Akhenaton (Amenhotep IV) was an Egyptian pharaoh who ruled from 1367 BCE to 1350 BCE. This statue shows one of his daughters with an elongated skull. It is thought that both the pharaoh and his daughters had this condition. Henry Wellcome did his utmost to acquire objects for his collection. He was not always successful. Undeterred, he would seek permission to have copies made of those objects he could not acquire. This copy was purchased by one of his agents, Captain P Johnston-Saint in Cairo in 1933. The original dates from 3000-1000 BCE and is at the Egyptian Museum in Cairo. maker: Egyptian Museum Place made: Cairo, Al-Qahirah, Urban, Egypt