Movie of a mouse head in development 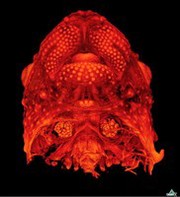 You can use this work for any purpose, as long as it is not primarily intended for or directed to commercial advantage or monetary compensation. You should also provide attribution to the original work, source and licence.

High Resolution Episcopic Microscopy 3D movie of a 14.5 days post coitum (dpc) mouse head. This image was created using 3D reconstruction HREM data. In HREM samples are embedded in a plastic that has been stained with eosin (a fluorescent dye). A microtome is used to slice away fine sections of the sample (as thin as 2 microns), then an image of the remaining block is captured after each slice is taken. These images are stored by a computer and using computer software are put together to create a three dimensional animation of the whole structure of the sample. Images are captured of the block surface rather than individual sections as this allows for perfectly aligned image date as the physical act of cutting sections can distort structures. Using computer software and altering the greyscale mapping of the voxel data, different structures within the head can be visualised or highlighted. Colour channels can then be added to the 3D reconstruction to highlight tissue density as shown here. Wellcome Image Award - Special Award winner 2009 Wellcome Image Awards 2009.