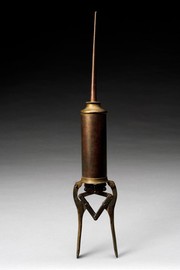 Enema syringes vary in shape and material but they are all intended to introduce liquids such as medications or purgatives into the body via the rectum. Made from brass, the liquid from this syringe is inserted using the scissor-like handles to pump it from the barrel to the nozzle, which can be unscrewed so the barrel can be filled with liquid. This is a particularly large syringe, almost 470 mm in length, with the nozzle measuring 165 mm. Enema syringes were widely used until the mid 1850s, after which the hypodermic syringe gradually became the drug-delivery system of choice. maker: Unknown maker Place made: Portugal