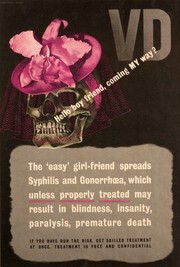 Venereal diseases (VD) – or sexually transmitted infections as they are known today – were a big problem during the Second World War, posing a constant threat to the fighting strength of troops. The main venereal diseases, syphilis and gonorrhoea, were potentially very serious. Left untreated syphilis could result in blindness, insanity, paralysis and death. This striking poster was part of an anti-VD campaign in 1943-1944 and warns of the ‘easy’ girlfriend who can spread disease. It was designed by Reginald Mount (1906-79), anartist who produced a number of wartime posters for the British Ministry of Information. designer: Mount, Reginald, maker: Her Majesty's Stationery Office Place made: Norwich, Norfolk, England, United Kingdom