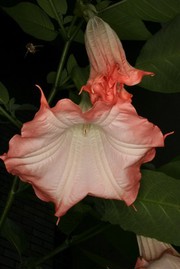 Brugmansia suaveolens (Willd.)Sweet, Solanaceae. Angels' Trumpets. Semi-woody shrub or small tree. 'Pink Beauty' is a pink flowered cultivar. Named for Sebald Justin Brugmans (1763-1819) Professor of Natural History and Medicine, and director of the Botanical Garden at Leiden. Distribution: Coastal rain forests of south-east Brazil below 1,000m. The whole plant contains high concentrations of tropane alkaloids: hyoscine (scopolamine), apohyoscine, norhyoscine, atropine (a racemic mixture of d- and l- hyoscyamine), noratropine, and tigloyl esters. The roots contain additional alkaloids. The flowers principally contain norhyoscine (Evans & Woolley, 1969). The tropane alkaloids block the peripheral actions of acetylcholine in the parasympathetic nervous system. They block the pupillary response to bright light, speed up the heart rate, reduce salivation and sweating, reduce gut motility and inhibit the vertigo and nausea of sea sickness. Centrally they disinhibit and relax and induce hallucinations, coma and death. The dried leaves were made into cigars, available on the National Health Service in 1948 to smoke as a treatment for asthma. As relaxation occurred and hallucinations were imminent, the patient's asthma was relieved. The leaves and flowers are dried and smoked around the world (in Australia the botanic gardens have to put fences around their plants to prevent theft) for their hallucinatory effects. Merely rubbing the flowers or leaves and then rubbing one's eye is sufficient to cause a dilated pupil, which may persist for three days (called 'gardener's mydriasis'). A contract worker at the Royal College of Physicians recounted drinking a tea made from the flowers (very bitter) of Brugmansia suaveolens at a beach party in South Africa and waking up 14 hours later with no memory of where he had been, covered in scratches and bruises, still with his surf board - but it appeared to have blue flames around the edges, and with tree small men in funny clothes and bobbly hats talking to him, who nobody else could see. He adamantly refused the offer of trying it again. Most tropane alkaloid induced hallucinations are perceived as unpleasant. Repeated rubbing the leaves with ones fingers can cause long term numbness, and sufficient hyoscine can be absorbed through the skin to induce trances and hallucinations if the leaves are rubbed over the whole body. Hyoscine (scopolamine) was reputedly used as a 'truth drug' because of its disinhibiting effect. It is used in pre-operative premedication, partly as a tranquilizer, partly to reduce saliva and bronchial secretions, and - perhaps - to induce amnesia (in case the patient wakes up during the operation). The plant is fragrant in the evening, and folk lore suggests that sleeping under it will bring death. However, analysis of the fragrance has not uncovered any lethal chemicals, mainly trans-ocimene and 1,8-cineole, with someterpenoids, benzenoids and indole. Perillene, a terpenoid, was the main volatile compound from the leaves. No tropane alkaloids were detected, and none of these are intoxicating at low exposures (Kite & Leon, 1995). Photographed in the Medicinal Garden of the Royal College of Physicians, London.