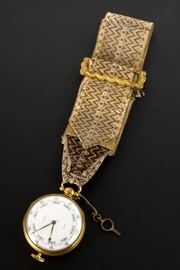 A stethometer is used to measure how far the chest expands during breathing. These measurements are useful in diagnosing a disease such as tuberculosis, which in its advanced state can reduce how well a person is able to breathe. This object was owned by John Harley, a physician who worked at King’s College Hospital and St Thomas’ Hospital (both in London) during his career. The stethometer was made by Robert Brettell Bate, an optical and mathematical instrument maker. maker: Bate, Robert Brettell Place made: London, Greater London, England, United Kingdom