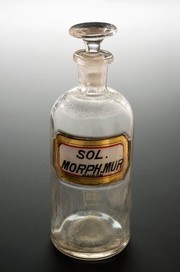 Made from clear glass, the label “SOL. MORPH. MUR.” etched into the side is abbreviated Latin for “Solution of morphine”. First isolated in 1803 by German pharmacist Friedrich Serturner, the name ‘morphine’ refers to Morpheus, the ancient Greek god of dreams. Its use rose dramatically after the development of the hypodermic needle in the 1850s, which allowed morphine to be injected directly. It was mainly used as a pain killer and ironically – given its highly addictive nature – was sometimes prescribed for alcohol or opium addiction. The bottle was originally owned by J A Reid, a chemist in Dumfriesshire, Scotland. maker: Unknown maker Place made: United States