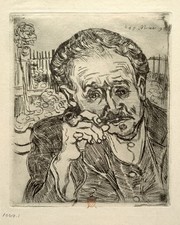 Paul-Ferdinand Gachet (1828-1909) was a maverick physician who practised what later came to be called complementary or alternative medicine. He had a consulting room in Paris to which he commuted from his house in Auvers-sur-Oise outside the city. He was an art lover, being an amateur artist, an art collector, and a friend of many artists, one of them being the Dutchman Vincent Van Gogh. Gachet and Van Gogh only knew each other for a couple of months, from 20 May 1890 when Van Gogh arrived to stay in a lodging house in Auvers, to 27 July 1890, when he shot himself. Van Gogh, suffering from a form of mania, was producing one painting a day at that time, but, with Gachet's help, was able to draw this etched portrait to be printed on Gachet's printing press, probably after Sunday lunch at Gachet's house on 15 June 1890. Gachet's moist-eyed portrayal reflects Van Gogh's impression that Gachet was "sicker than I am", but it could in turn result from the fact that the sitter was looking at the artist and contemplating his lamentable mental state. This impression of the print was bought by Henry S. Wellcome from Gachet's son, Paul Louis Gachet, in 1927, together with many other items of Gachet personalia. The cat in the bottom margin is the stamp certifying the print's provenance from Paul-Louis Gachet.