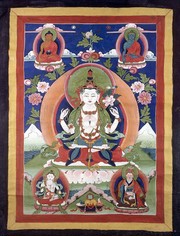 In the centre of the painting is Avalokiteśvara, the patron deity of Tibet, whose chief function is compassion. His body-colour is white. In his top knot there is an image of Amitābha, the Buddha of Infinite Light. He has four arms: in his upper right hand he holds a rosary, in his upper left hand an open white lotus, and in his two lower hands he holds a jewel level with his heart. He is seated in full lotus posture on a lotus throne In the top left corner is a seated Śākyamuni Buddha, his body colour golden with a green halo and a dark blue body-nimbus. In his left hand he holds a dark blue begging bowl and his right hand forms the earth-touching gesture which calls the earth to witness that he has reached supreme Enlightenment The deity in the top right corner is Vajrasattva, his body-colour blue, with a green halo and dark blue body-nimbus, his left hand in meditation gesture holding a vajra (thunderbolt), his right hand forming the earth-touching gesture. His hair and top knot are golden and he wears monk's robes In the bottom left corner the White Tara holds a vajra in each hand, one pointing upwards and one downwards. She wears golden Bodhisattva ornaments and sits in full lotus meditation posture, i.e. with the soles of both feet turned upwards on both thighs, on a lotus throne In the bottom right corner Padmasambhava is seated, a ritual wand under his left arm, his left hand holding a white bowl, his right hand a vajra, seated in meditation posture on a lotus throne. In the centre are the symbols of the five senses

Marianne Winder, Catalogue of Tibetan manuscripts and xylographs, and catalogue of thankas, banners and other paintings and drawings in the Library of the Wellcome Institute for the History of Medicine, London 1989, pp. 79-80, thankas banners and paintings no. 12